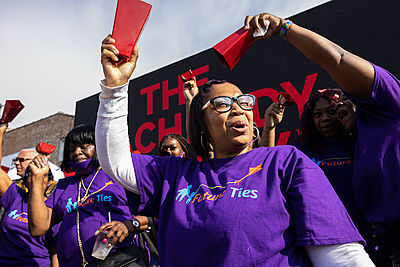 A $1M grant toward a new, expanded facility will also allow the nonprofit to offer wraparound wellness services for other community members

When Chicago police officer Jennifer Maddox learned last month that Future Ties, the nonprofit she founded to provide a safe after-school and summer space for South Side youth, had been chosen to receive a million-dollar grant, she was shocked.

“I was in disbelief, a lot of different emotions came over me,” Maddox said. “I just didn’t know what to do. I was crying. I could hardly talk.”

Maddox will finally be able to relocate her organization from the cramped basement in the Parkway Gardens affordable housing complex in Woodlawn where she started it a decade ago to a nearby building. The extra space will allow her to start serving teens in addition to the elementary school children Future Ties already works with and offer wraparound health and wellness services for their families.

The grant from health and fitness company Beachbody, given in partnership with advocacy group GO Campaign, was the latest milestone Future Ties has reached since becoming a participant in the University of Chicago’s Community Programs Accelerator in 2015. A program of the University’s Office of Civic Engagement, the Accelerator helps equip nonprofits that serve the South Side with tools and resources to fulfill their unique missions. In Future Ties’ case, that has meant building the organization’s capacity to offer year-round mentoring, tutoring, and enrichment programs to low-income and at-risk youth.

“I got tired of watching my young people get gunned down in these streets,” Maddox, who still works midnight shifts as a police officer, said. “I’ve been to so many different funerals of our young people who didn’t have anywhere else safe to go and socialize with their friends or be a part of any kind of programming or opportunities to have a job or any type of a resource that would keep them busy and occupied so I’ve been really working at this for a long time.”

Six years ago, when Future Ties first connected with the University, Maddox says the organization only had a name and a mission.

The Accelerator supported Future Ties in everything from strategic planning and board and curriculum development to getting the organization’s website and social media up and running. Early on, much of the focus was on the most basic needs of a nonprofit: creating a budget, fundraising, and grant writing support. Over the years, that support helped Future Ties raise the funds needed to grow its annual budget from around $30,000 in 2015 to around $200,000 when it graduated out of the program in May.

In 2018, the Accelerator gave Future Ties a $50,000 grant, allowing Maddox to create a much-needed technology hub for young people and their parents in Parkway Gardens, among other improvements. The hub later helped make the organization’s shift to online programming during the COVID-19 pandemic seamless.

Maddox also seized opportunities to connect with University leaders, resources, and opportunities including the Civic Leadership Academy, a leadership development program led by the Harris School of Public Policy for leaders who work in nonprofits and local government agencies across Chicago from which she graduated in 2017.

Sharon Grant, executive director of the Community Programs Accelerator, says the years of hard work Future Ties has put into strengthening its infrastructure with the Accelerator positioned the organization for this pivotal moment.

“The Accelerator’s mission is to guide organizations in building the organizational resilience, programmatic strength, and human capacity to advance positive change in their neighborhoods and it has been amazing to see Future Ties’ transformative growth in all these areas,” Grant says. “Jennifer and her team are now at a place where her vision for Future Ties can be realized, preventing more community violence and trauma by providing a safe space for young people to learn and grow and for their families to access the resources they need.”

Plans for the new center feature a kitchen for teaching about healthy eating and nutrition, a gym for young people to play sports without concerns of neighborhood violence and other threats, as well as mental health counseling and wellness classes to teach families how to cope with trauma and manage their stress, anxiety, and PTSD.

On June 28, Maddox, her team, and representatives from the Accelerator and Beachbody, along with other community members celebrated with a kick-off event at the site of Future Ties’ new center. One young man who’d participated in Future Ties’ programming over the years told Maddox he’d asked for the day off work because he felt it was so important that he be there to honor the occasion. 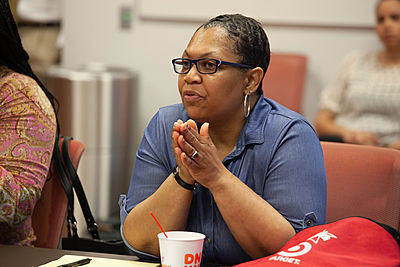 Staff of Future Ties, a nonprofit serving children and youth at Parkway Gardens, participated in a two-day training on trauma-informed care organized by the University of Chicago Office of Civic Engagement and its Community Programs Accelerator.

Jennifer Maddox, a Chicago police officer who was working a second job as a security officer in a low-income housing complex 10 years ago, didn’t plan to start a nonprofit—she was just looking for a room where kids could go after school to be safe and have fun.